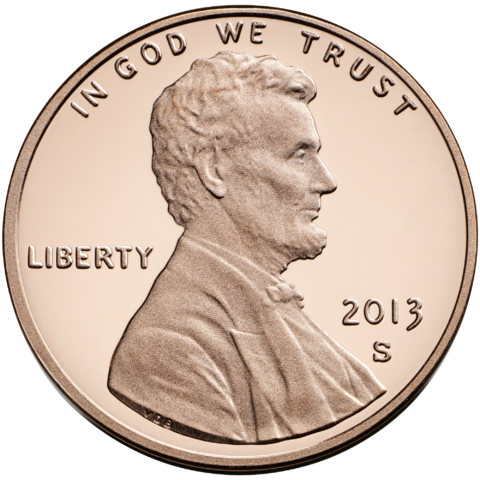 Millions of Americans still love the penny.
But are they aware of its drawbacks?

The penny is a useless yet beloved token of American nostalgia. Although the coin is not accepted in vending machines or parking meters, and many cashiers ignore it, Americans don't want to retire the penny. In a 2011 Huffington Post / YouGov poll, a plurality of subjects strongly opposed getting rid of the coin:

Would you favor or oppose eliminating the penny coin,
so that the lowest valued coin available would be the nickel?

But the penny has no place in modern society. Many other countries, such as Australia, Canada, and Switzerland, have gotten rid of them successfully. Read on to experience the visual arguments for eliminating the penny.

1. Getting rid of the penny won't harm consumers or businesses.

In a penniless world, the unit of a cent ($0.01) would not go away. Credit cards and digital payment systems would still be charged the exact price, down to the cent.

But cash transactions would be a different story. Because pennies wouldn't exist, all transactions paid for in cash would be rounded to the nearest nickel. This means a sale could only end in a 0 or a 5.

In some prices, the nearest nickel is cheaper than the price, and the price gets rounded down. This results in a gain to the customer, because they would be paying less than the sale originally. A customer can gain either $0.01 (light green) or $0.02 (dark green) from rounding. In other instances, the nearest nickel is higher, and the price gets rounded up, resulting in a benefit to the store. A store can also gain either $0.01 (light red) or $0.02 (dark red) from rounding.

Finally, there are prices that already end in a 0 or 5 and don't need to be rounded at all (light grey).

These are a series of one hundred items, sampled from a real life dataset containing over three thousand products from a convenience store chain. Each rectangle represents the price of one item. The data was supplied by Professor Raymond Lombra, a supporter of keeping the penny.

Lombra argues that because most items end in a 9, stores are most likely to benefit from a penniless world. In the graphic at right, a store would gain $0.01 from each product that is light red.

A penny does not mean much on the individual level, but consider the collective implications of eliminating the penny. Merchants would gain millions, while customers would lose out.

The mean of all the rounding outcomes in the distribution is $0.01 in favor of the store. This means that in a penniless economy, on average, one could expect most individual items to be rounded up $0.01.

However, there is an important caveat of rounding that serves a powerful counterpoint to Lombra’s model. It is evident that when people purchase goods as a store, they are not buying one item at a time. Rather, a transaction can consist of multiple items, and may also include tax.

At right is a collection of one hundred real transactions from another convenience store chain, sampled in real-time from a database. These transactions are composed of one or more items, and may or may not include tax. In short, this data is more realistic representation of how people buy things. Professor Robert Whaples, a proponent of eliminating the penny, provided this data.

Transactions have ending numbers that are much more varied than individual items. The colors are much more diverse than the previous item distribution, indicating a mixture of rounding outcomes.

When the transactions are analyzed as a whole, it becomes even more clear that the bias towards stores has disappeared. There is a healthy proportion of transactions that benefit both stores and consumers, in addition to prices that do not get rounded.

Furthermore, the mean of this distribution, rounded to the nearest nickel, is $0.00. This indicates that an “average” transaction would undergo no rounding. In practice, because the distribution is so diverse, there would be a wide variety of rounding outcomes. But as a whole, rounding would balance out. Therefore, eliminating the penny and rounding to the nearest nickel would have a nil effect. Because transactions are so varied, it would be very hard for businesses to price-fix. In countries that have eliminated the penny (such as Canada), legislation mandates that it is only the final transaction total that can be rounded, so customers would not have to worry about stores rounding every item.

2. The penny costs the federal government millions of dollars each year.

The price of zinc is quite variable, and it is not uncommon for the metal to experience year-to-year changes in price in regards to supply and demand. What is concerning, however, is that starting in the 2000’s, the price of zinc has absolutely skyrocketed. The cost of zinc is rising because it is a versatile metal with a variety of applications, especially in infrastructure. China has been a core driver of raw materials prices in recent years, especially as it continues to urbanize. In 2016, the Chinese spent $2 trillion on infrastructure, more than the U.S. and Europe combined!

This graph presents the cost to mint a penny in the 2000's. Before 2006, a penny cost less than one cent to make. Since then, a penny has always cost more than itself to make, reaching a high of over two cents.

In isolation, a cent might not seem like a big deal. However, the U.S. Mint produces 13 billion pennies each year. The Mint “sells” the coins to the U.S. Treasury, who pays the full production cost of the coins. The difference between the face value of the coins and the cost to produce them is known as seigniorage. Before 2006, seigniorage was a convenient way for the government to make money on pennies, as they cost less to produce than they were worth. But since then, the government has been losing millions on the penny each year.

3. Pennies have no value.

Price inflation has rendered the penny a worthless unit of currency. The graphic at right shows how the buying power of the penny has sharply decreased over the last 100 years.

In 1910, the average wage was 22 cents per hour. The penny had roughly the buying power of today's quarter.

Americans made less, but their money could go a lot further. Depending on the item, a penny could buy 20, 30, even 100 times more than what it does now.

Price inflation alone isn’t a good reason for eliminating small currency. For example, the nickel is another coin with paltry buying power. But getting rid of it would cause prices to be rounded to the nearest dime, which would hurt consumers a lot more.

The penny should be retired because it is too small to be meaningful in today's economy.

Hopefully, these arguments have convinced you that the penny is doing more harm than good. Yet, there is something warm about the feelings a penny can invoke. Maybe it’s the good luck associated with finding one heads up, or the distant recollection of going to the drugstore and ordering a root beer float with the change in your pocket. From a purely economic perspective, people would be better served by letting them remain on the ground. Yet a resounding majority of Americans choose to pick them up:

Which are you more likely to do when you see a penny on the ground?
Each penny represents a poll respondent.

There is a certain human element about the penny that is far more precious than one cent. But if America is to remain a modern and flexible country, it needs to know when to adapt. The values of frugality, hard-work, and patriotism the penny represents will always live on.